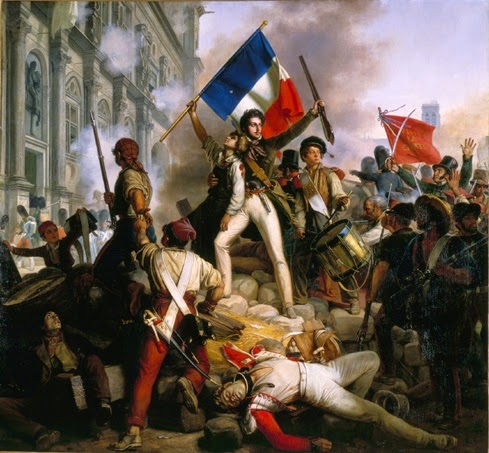 ...My antipathy to the French Revolution was brought into focus by Dom Gregory Pilcher’s observation while I was visiting in his Arkansas parish last week. Enjoying a grumble and a glass of beer, Father Pilcher said, “The problem is that Americans have replaced Faith, Hope and Charity with Liberté, Egalité and Fraternité.
It is a kind of secular heresy, for heresy is not a lie, but a half truth. Heresy is one truth promoted to the exclusion of another. Heresy is also one truth promoted above another truth to which it should be subject. Heresy lacks the proper order of goods and ignores the hierarchy of truth. Heresy is truth distorted and disordered.
When this happens even the truth that is espoused becomes deformed. Without Faith, Hope and Charity, Liberty becomes License, Equality becomes the destruction of those who seem superior and Fraternity becomes no more than indolent tolerance.
Echoing the anthems of the French Revolution, the progressives in America have embraced Liberty, Equality and Fraternity as the only virtues. Consequently Liberty now means every man must be allowed to do whatever he pleases as long as he harms no one. What everyone misses is that this is the motto of the Satanists: “Do as you please, but harm none.”
The obsession with equality has been become an aggressive attack on any person who in any way might just possibly be racist, homophobic, misogynistic or just plan unkind in any conceivable way. Such individuals must be isolated, ostracized, punished and persecuted by the crowd howling for equality. Equality has become, as it was in the French Revolution, not just a mob rule, but a mob rampage.
Fraternity is not the fond embrace of one’s fellow man, but an indolent acceptance of every other person without discernment of character or recognition of accomplishment. For the modern progressive “Fraternity” is an obliteration of personality, a dumbing down of individual ideas and a leveling of the population so that everyone becomes a cipher, a comrade, a drone and a drudge.
While these three impostors might be called “virtues” notice that there is little about them which an individual soul might work on to become more truly virtuous. “Liberty!” may be a stirring battle cry, but how do I attain this virtue except by demanding that I be permitted to do whatever I want provided that I allow everyone else to do what they want? If I am simply doing what I want how is that virtuous, for virtue, by definition demands personal discipline and self sacrifice.
Notice how we always wish to be equal to those above us and not to those below. The cry “Equality!” must inevitably sound like “I am equal to you!” How then, might I obtain the virtue of equality without self assertion and hubris? I might try to consider others to be my equal, but this virtue is hardly more than a good idea, and should I try to put it into effect I should be prepared to receive a good knock on the head from the person I was trying to treat equally, for in doing so I had proclaimed him to be my inferior and patronized him in the process.
Fraternity is not a virtue, but a vague ideal. I may wish all men to be my brother, but I am like Edna St Vincent Millay who said, “I love humanity, but hate people.” What is there to bring me together with another human being? A shared ideology and a shared goal might make me cast an arm around his shoulder, but sharing a goal makes me a team mate, not a brother. Fraternity remains elusive for most attempts at brotherhood end as Cain and Abel’s did.
...
The conservative sees what is good in Liberty, Equality and Fraternity, but sees within these secular virtues a deeper and more original good. The theological virtues are supernatural gifts that inspire and empower not the Liberty, Equality and Fraternity of revolution, but the true Freedom that comes from Faith, the Fulfillment of the Individual and the Fire of Divine Love that purifies and transforms both the human soul and human society.
Postado por Pedro Erik Carneiro às 06:35