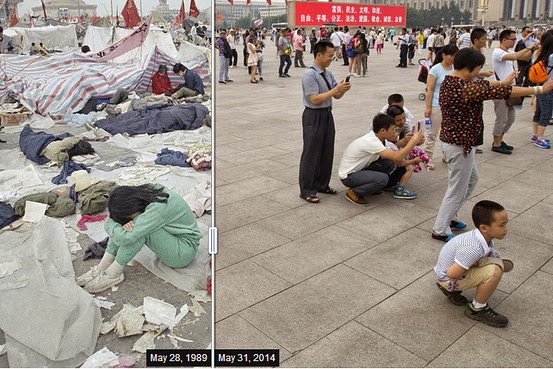 Vejamos parte do texto do jornal.

By Isabell Steger and Chester Yung
HONG KONG—Tens of thousands of people in Hong Kong rallied on Wednesday to mark the anniversary of the 1989 crackdown on student protesters in Beijing, but political fractures in the city were showing.
The annual candlelight vigil in the city is the biggest event globally marking the crackdown, and organizers were hoping the 25th anniversary would push the crowd above the 100,000 level it has hit in years past. Organizers put initial crowd estimates at 180,000 people, while police estimated that there were 99,500 participants.
From above the vigil, the park was a sea of candlelight, with people spilling out to the fringes. Call and responses echoed off nearby buildings. Videos were shown of Chinese activists thanking Hong Kong for holding the vigil.
"The Chinese communist regime cannot control everything," said Teng Biao, a prominent human rights lawyer in China, who joined the vigil for the first time, drawing loud applause as he took the stage in Victoria Park. "I believe the truth of June 4 crackdown will be known in China one day. There are many people in the mainland who are working hard for this day."
Mr. Teng, a visiting scholar at the Chinese University of Hong Kong, said he saluted visitors from the mainland attended the Hong Kong rally Wednesday night.
The Chinese government forbids mentions of the anniversary and in recent days has tightened security in Beijing, arrested activists and suspended some accounts on Chinese microblogging site Sina Weibo. Hong Kong is part of China but has its own legal system and retains some political autonomy, so the restrictions related to the anniversary on the mainland don't apply to the city.
Tensions between Hong Kong and mainland China have escalated in recent years, and they are coloring this year's vigil. A pro-Beijing group is holding its own event, while another rally is focused on local politics. Another division is emerging between the rally's long-time organizers and young activists emboldened by a successful protest against a Beijing-imposed school curriculum.
As in previous years, mourners dressed in black attended the candlelight memorial organized by the Hong Kong Alliance in Support of Democratic Movements of China, featuring the usual rundown of events such as singing and speeches.
But there was a new and controversial face this year. For the first time, the Voice of Loving Hong Kong, a pro-Beijing group, set up a counter-rally outside Victoria Park. Its chairman, Patrick Ko, said the group would show a video that is critical of the Alliance for not knowing the "full truth" of the event.
"The student leaders could have exaggerated the number of deaths," said Mr. Ko. "Beijing had to take inevitably, extreme actions to restore social order and maintain social security."
The presence of the group is one indicator of the fractiousness of Hong Kong society, which has become increasingly divided over mainland China's political and economic influence in the city, with pro-Beijing supporters often appearing at protests organized by local pro-democracy activists.
...
In Taiwan, several hundred people gathered at Liberty Square in downtown Taipei on Wednesday evening to commemorate the 1989 crackdown, with many also taking a localized view on the vigil.
Alexandra Lee, a student at National Taiwan University, said she saw a common cause between recent Taiwanese student protests, known as the Sunflower Student Movement, and the student protesters in China in 1989.
"As a human being, I feel I must stand up and do something about political oppression," Ms. Lee said. "Maybe I can't do much, but at least I should learn about it. Ignorance will only allow government oppression to repeat over and over again."
In a video statement to the crowd in Taipei, Wang Dan, one of the former Tiananmen protest leaders who now lives in Taiwan, said, "Democracy is the real China dream."
Taiwan President Ma Ying-jeou called on the Beijing to "seriously ponder and quickly redress" the injustices that occurred during the 1989 crackdown.
In Hong Kong, a new permanent museum on the June 4 crackdown that opened this year is providing another venue to learn about the crackdown.
On Wednesday morning, the small museum received more visitors from the mainland than usual, museum staff said. On Tuesday night, they said a corporate group of 51 people touring Hong Kong from Hangzhou visited the museum, which is housed in a nondescript building in the Tsim Sha Tsui district.
A trio of 24-year-old university graduates from Dongguan in neighboring Guangdong province closely read displays describing the events leading up to the June 4 crackdown, diligently scanning the QR codes on the walls with their smartphones. The three, which did not want to give their names, said they came to Hong Kong especially to visit the museum and attend the vigil.
Another man from Zhejiang province who declined to be named, arrived at the museum before its 10 a.m. opening time. He fervently leafed through a clear folder containing copies of Hong Kong newspapers from 1989, and watched a video of the Tiananmen mothers giving testimonies of what happened to their children on June 4. He said he learned about the museum through the BBC's Chinese news service, taking out hisiPhone to open up the app.
---
Rezemos pela China. Os mortos de Tiananmen ainda gritam por democracia.