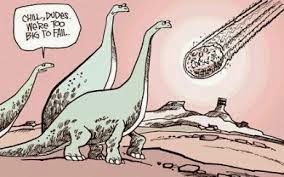 
Too big to fail is likely to prove a costly epithet for the world’s biggest banks as regulators demand they increase holdings of debt securities to cover losses should they collapse.
The shortfall facing lenders from JPMorgan Chase & Co. (JPM) to HSBC Holdings Plc could be as much as $870 billion, according to estimates from AllianceBernstein Ltd., or as little as $237 billion forecast by Barclays Plc.
The range is so wide because proposals from the Basel-based Financial Stability Board outline various possibilities for the amount lenders need to have available as a portion of risk-weighted assets. With those holdings in excess of $21 trillion at the lenders most directly affected, small changes to assumptions translate into big numbers.
“The direction is clear and it is clear that we are talking about huge amounts,” said Emil Petrov, who heads the capital solutions group at Nomura International Plc in London. “What is less clear is how we get there. Regulatory timelines will stretch far into the future but how quickly will the market demand full compliance?”
The FSB wants to limit the damage the collapse of a major bank would inflict on the world economy by forcing them to hold debt that can be written down to help recapitalize an insolvent lender. For senior bonds to suffer losses under present rules the institution has to enter bankruptcy, a move that would inflict huge damage on the financial system worldwide if it happened to a global bank.

That’s what happened when Lehman Brothers Holdings Inc. collapsed in 2008, prompting governments around the world to step in with taxpayers money to rescue lenders placed at risk in the turmoil that followed.
The FSB, which consists of regulators and central bankers from around the world, will present its draft rules to a G-20 summit in Brisbane, Australia, next month. Its proposals call for 27 of the world’s largest banks to hold loss-absorbing debt and equity equivalent to 16 percent to 20 percent of their risk-weighted assets to take losses in a failure, ensuring investors rather than taxpayers pick up the bill should a lender collapse.
Under the plans, these lenders will also have to meet buffer rules set by the Basel Committee on Banking Supervision, another group of global regulators. These can amount to a further 5 percent of risk-weighted assets, taking banks’ requirements to as much as 25 percent of holdings.

“There’s a huge potential stream of issuance to be done,” said Steve Hussey, who heads financial institutions research at AllianceBernstein in London. The company manages the equivalent of $473 billion. “If the requirements were implemented today then there would be significant shortfalls and pressure for issuance of all kinds of eligible capital.”
Using the 16 percent figure, the shortfall globally is about $375 billion, according to Hussey. At 20 percent, the requirement would be $870 billion, which he called “extreme.” He expects European lenders to have larger needs than the U.S.