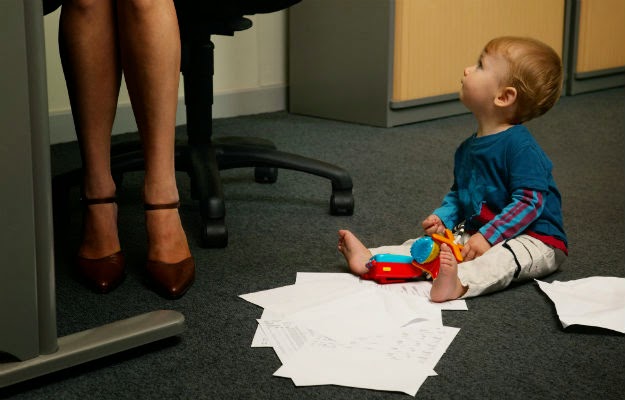 The Death of Our Family Wage Culture


The U.S. Department of Labor reports that last year, only one-fifth of married couple homes were supported solely by the employment of the husband. The wife was the only employed member of the household in 7.8 percent of married-couple homes (with 6.2 percent supported by other employment combinations, and 18.5 percent having no employed members). The numbers get even more interesting, and troubling, when they are specified to families with children. In 2013, almost 70 percent of all mothers, married and single, with children under the age of eighteen were participants in the labor force (either as employees or as those actively looking for employment). Notice that the presence of children in the home makes it more likely, rather than less, that women will be driven to seek employment outside of the home.
This makes sense, considering the addition expenses that come with raising children. But perhaps the perceived sensibility of this trend deserves a second look, considering the additional time and effort needed, and hopefully desired, by women with children in order to adequately provide for the nurturing, care, and education of their young. While the added expense of children is significant, it seems that the demands in time, energy, and attentiveness are greater yet.
...
Gender CompetitionHistorian Allan Carlson links the erosion of the natural family unit with the loss of the “family wage culture” that had made the baby boom of the 1950s possible. Carlson suggests that the movement towards a family wage economy had been initiated in the 1840s by social reformers and Catholic theorists, whose “proudest achievement was the liberation of married women from toil in the factories, so that they might care for the home and children and so prevent the full industrialization of human life.” In order to achieve this sort of culture, Carlson notes, wage discrimination against women was required. Working women were paid an “individual wage,” with the assumption that they were not supporting dependents and were merely supplementing their husband’s wages. This family wage culture was able to thrive even after 1942 wartime regulations prohibited wage discrimination against women. According to Carlson, “equal pay for equal work was basically achieved by 1945. But for another 25 years, job segregation by gender more than compensated for this. Women workers crowded into ‘women’s jobs’ that invariably paid less than ‘men’s jobs,’ and the so-called wage gap between men and women actually grew.” This system, which had a direct effect on higher marriage and birth rates, would finally collapse in the wake of further policy changes. Carlson asserts “the addition, as an afterthought, of the word sex to Title VII of the Civil Rights Act of 1964, became by 1970 the chief tool in eliminating job segregation by gender, so ending the nation’s informal family wage system.”
ImmigrationWhile this is a multifaceted and difficult subject to approach from the perspective of morality and social justice, it has clearly observable implications in the economic sphere. Recent reports suggest that immigration rates have resulted in considerable wage reduction in the U.S., particularly in lower-skilled professions. In his article “On Immigration: It’s Time to Defend Americans,” Senator Jeff Sessions (R-AL) cites data “showing that since 2000 all of the net gain in the number of working-age (16 to 65) people holding a job has gone to immigrants,” and claims this surplus of labor is partly responsible for the reduction of the median U.S. household income by almost $6,000 from 2007 to 2012. While there were certainly other factors at work during these years, Sessions asserts that immigration played no small role.
Perhaps the modern confusion about the definition of marriage, the essence of family, the responsible role of government in the economy, and even the nature of happiness in general, have all contributed to our contemporary views on household economics. In our attempt to provide everybody with what they think they want, be it a career of a certain sort or just a convenience of a certain sort, perhaps we have deprived one another of what we truly desire. In What’s Wrong with the World, G.K. Chesterton wrote, “I do not deny that women have been wronged and even tortured; but I doubt if they were ever tortured so much as they are tortured now by the absurd modern attempt to make them domestic empresses and competitive clerks at the same time.” In the same vein, John Senior suggested in The Restoration of Christian Culture that “Woman’s place is in the home not because some chauvinist put her there, but because there is a law of gravity in human nature, as there is in physics, by which we seek our happiness at the center.”
Each married couple must discern for themselves the most prudent and proper way to provide for their families; financially, spiritually, socially, and emotionally. Many families may very well be best suited by having both parents work outside of the home. But something tells me that many more families will be even better suited by making the difficult choices and efforts required to live, and even thrive, with only one parent engaged in outside employment. The job of our policymakers and employers, then, is to encourage and provide the opportunity for a society made up of cooperative families supported by breadwinners to emerge.