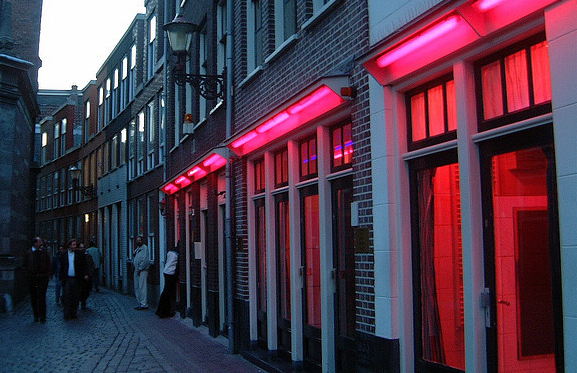 Do you remember the rather brilliant comedy sketch featuring Harry Enfield and Paul Whitehouse in which they played laid-back police officers in Amsterdam, bragging that they no longer have to deal with the crime of murder in the Netherlands since the Dutch legalised it? Don’t laugh too hard. In 2000 the Dutch government decided to make it even easier for pimps, traffickers and punters by legalising the already massive and highly visible brothel trade. Their logic was as simple as it was deceptive: to make things safer for everyone. Make it a job like any other. Once the women were liberated from the underworld, the crooks, drug dealers and people traffickers would drift away.

Twelve years on, and we can now see the results of this experiment. Rather than afford better protection for the women, it has simply increased the market. Rather than confine the brothels to a discrete (and avoidable) part of the city, the sex industry has spilt out all over Amsterdam — including on-street. Rather than be given rights in the ‘workplace’, the prostitutes have found the pimps are as brutal as ever. The government-funded union set up to protect them has been shunned by the vast majority of prostitutes, who remain too scared to complain.

Pimps, under legalisation, have been reclassified as managers and businessmen. Abuse suffered by the women is now called an ‘occupational hazard’, like a stone dropped on a builder’s toe. Sex tourism has grown faster in Amsterdam than the regular type of tourism: as the city became the brothel of Europe, women have been imported by traffickers from Africa, Eastern Europe and Asia to meet the demand. In other words, the pimps remained but became legit — violence was still prevalent but part of the job, and trafficking increased. Support for the women to leave prostitution became almost nonexistent. The innate murkiness of the job has not been washed away by legal benediction.

The Dutch government hoped to play the role of the honourable pimp, taking its share in the proceeds of prostitution through taxation. But only 5 per cent of the women registered for tax, because no one wants to be known as a whore — however legal it may be. Illegality has simply taken a new form, with an increase in trafficking, unlicensed brothels and pimping; with policing completely out of the picture, it was easier to break the laws that remained. To pimp out women from non-EU countries, desperate for a new life, remains illegal. But it’s never been easier.

Legalisation has imposed brothels on areas all over Holland, whether they want them or not. Even if a city or town opposes establishing a brothel, it must allow at least one — not doing so is contrary to the basic federal right to work. To many Dutch, legality and decency have been irreconcilably divorced. It has been a social, legal and economic failure — and the madness, finally, is coming to an end.

The brothel boom is over. A third of Amsterdam’s bordellos have been closed due to the involvement of organised criminals and drug dealers and the increase in trafficking of women. Police now acknowledge that the red-light district has mutated into a global hub for human trafficking and money laundering. The streets have been infiltrated by grooming gangs seeking out young, vulnerable girls and marketing them to men as virgins who will do whatever they are told. Many of those involved in Amsterdam’s regular tourist trade — the museums and canals — fear that their visitors are vanishing along with the city’s reputation.

I was last there with Roger Matthews, a professor of Criminology at Kent University and a renowned expert on the sex trade. The politicians he spoke to confess that the legislation has made a total pig’s ear of an already unsavoury situation. So the repair work is starting — for what good it will do. Women who rent the windows will soon be obliged to register as prostitutes. This will be as ineffective as the obligation on them to pay tax. When the fake and government-funded union supposedly representing those involved in prostitution did a massive membership recruitment post-legalisation, only a hundred joined, and most of those were strippers and lap dancers.

Rather than remove the sleaziness of the red light district, it made the area more depressing than ever — full of drunken sex tourists who act as window shoppers, pointing and laughing at the women they see. Local women pass the streets with their heads down, trying not to see the other women displayed like cuts of meat in a butcher’s shop. Men can be seen entering the brothels, trying to barter down the price. Others come out zipping up their jeans. Many of the women look very young, all of them bored, with the majority sitting on stools in underwear playing with their phones.

Nowhere else in the world is street prostitution legal, because people do not want it in plain sight. Where there is a street sex trade, women are accosted on their way home by punters, and often condoms, drugs paraphernalia and pimps are visible. But the Netherlands decided in 1996 that street prostitution was a decent way to earn money and created several ‘tolerance zones’ for men to safely rent a vagina, anus or mouth for a few minutes. Cars drive into cubicles. This being the Netherlands, there is a special section for cyclists. Keep prostitution green.

The day after the Amsterdam zone opened, more than a hundred residents from nearby neighbourhoods took to the streets in protest. It took six years for the mayor to admit in public that the experiment had been a disaster, a magnet for trafficked women, drug dealers and underage girls. Zones in Rotterdam, The Hague and Heerlen have shut down in similar circumstances. The direction of travel is clear: legalisation will be repealed. Legalisation has not been emancipation. It has instead resulted in the appalling, inhuman, degrading treatment of women, because it declares the buying and selling of human flesh acceptable. And as the Dutch government reforms itself from pimp to protector, it will have time to reflect on the damage done to the women caught in this calamitous social experiment.