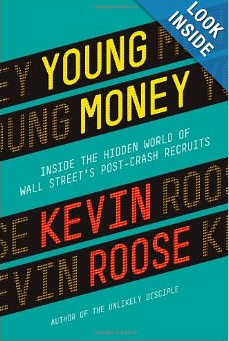 The Woes of Wall Street: Why Young Bankers Are So Miserable

The pay is good. Everything else is bad.
Over a few beers after work one spring evening, two junior Goldman Sachs employees started contemplating the best ways to kill themselves.

“If the goal is, like, how do I inflict maximum psychological damage, then I think just going up to your desk and blowing your brains out in the middle of the day would be the best,” said Jeremy Miller-Reed, 23.
“Nah,” said Samson White, 22. “You know what would happen? All the other analysts would get an e-mail from the associates saying, ‘Can you guys clean this up?’ And then everyone would go back to work.”

Jeremy and Samson—I’ve changed their names to protect their anonymity—were first-year analysts at Goldman. They’d arrived from their Ivy League campuses less than a year before, fresh-faced and idealistic. Jeremy had gotten placed in commodities, and Samson had made a home in the firm’s mortgage division. Good friends since their summer internships the year before, they’d been excited, at first, to join the ranks and get to work making money. But quickly, their enthusiasm had been buried underneath massive piles of work, grueling hours, and unforgiving bosses. In one particularly bleak moment, they’d started calling Goldman’s downtown headquarters “Azkaban,” after the prison in the Harry Potter series where inmates’ souls are sucked from their bodies.

For my new book, Young Money: Inside the Hidden World of Wall Street’s Post-Crash Recruits, I spent three years shadowing eight young Wall Street workers, including Jeremy and Samson. Given the rollicking depictions of finance life we see in movies like The Wolf of Wall Street, and the fact that these jobs are extremely well-paid—first-year investment bankers make anywhere from $90,000 to $140,000, including year-end bonuses—you might think that my eight banker informants were living the good life. But in three years, hardly an interview went by without a young banker confessing his or her struggles with depression and health problems, expressing a desire to quit, or simply complaining about how working in finance was ruining the pleasures of normal life.

Why are young bankers so uniformly miserable? After spending many, many hours in their company, I think at least three factors explain why Wall Street is a singularly unpleasant place for young people to work.

1. The Hours
Wall Street is notorious for the long hours it imposes on its worker bees. (One young banker bragged to me about working the “banker 9-to-5,” defined as 9 a.m. until 5 a.m. the next day.) But lots of professions – law and medicine, to name just two – work their underlings hard. What makes banking different is that the work can arrive at any moment, unannounced and requiring immediate attention. If a client needs a PowerPoint presentation at 4 a.m. on Christmas morning, a junior banker will have to wake up and get to the office.

What this means, in practice, is that young bankers live in a state of perpetual anxiety, and advance planning becomes impossible. Boyfriends and girlfriends get upset about broken dinner plans, friends and family members become estranged, and phones function as third limbs. This unpredictability, combined with the sheer number of hours involved, takes a toll. A recent academic study of young bankers by a University of Southern California business school professor named Alexandra Michel underscored the vital, even bodily, nature of the transformation that is taking place during a banker’s first years. Michel wrote:

During years 1–3, bankers construed their bodies as objects that the mind controls. They worked long hours, neglected family and hobbies, and fought their [bodies’] needs in order to enhance productivity. They suppressed the need for prolonged sleep, taking “naps at 11 p.m. and then again at 1, 3, and 4.” When I asked, “Aren’t you worried that this will affect your health?” most responded like this Bank A associate: “For the next few years, work has priority. I’ll worry about my health then.” To my question, “What if you do irreversible damage?” many answered, ‘‘I am willing to take that risk.”

Recently, Wall Street banks have tried to ease up on young workers by, in many cases, giving them the weekends off. But will the new rules really mean a lighter workload? Or will the weekdays become even more painful to make up for missed Saturdays?

2. Money
All eight of the young bankers I followed entered the financial industry after the crash of 2008 and saw a wildly different scene than they’d imagined as college students. Thousands of bankers were being laid off, firms were chopping off entire divisions, and pay for everyone had come down to levels that, while still lucrative by any real-world measure, were far lower than they’d been before the crash.

For young Wall Street bankers, who often get themselves through tough stretches by imagining their year-end bonuses arriving, the post-crash uncertainty was destabilizing. Once, it had been relatively certain that a young banker or trader who did well would earn much more with each passing year, and would eventually become a millionaire, probably before his or her 30th birthday. But after 2008, the golden pathway began to splinter. New regulation meant to prevent another financial crisis made banks less profitable, and the struggling markets meant that even young bankers—who had historically been immune from layoffs during downturns, so cheap was their labor compared to that of senior bankers—were at risk of losing it all.
One Goldman Sachs analyst explained to me the effect the layoffs and cost-cuts had on the psyches of the sector’s youth.

“You’re working with this constant fear,” he said. “You go to this bulletproof firm, it gives you a ton of options, and it’s really self-validating. And then all of the sudden, you have no options, you’re not getting paid nearly as much as you thought, and you might get fired. And then you start thinking, Well, shit, I could be halfway through law school, and instead I’m in New York dicking around doing models and bottles, and at the end of it I won’t even have that much to show for it.”

The markets have since recovered, as has profitability at some of the Wall Street firms damaged during the crisis. But young Wall Street hasn’t regained its sense of security. It might take a while.

3. Purpose
It might sound strange, but many young people come to Wall Street expecting to make the world a better place. This is partly the fault of recruiters, who tempt college juniors and seniors with promises of “real-world responsibility” and rhapsodies about socially responsible investing. But it’s also wishful thinking on the recruits’ part. Jeremy, for instance, had arrived at Goldman thinking that his specific job—trading commodities derivatives—could make the world a teensy bit better by allowing large companies to hedge their costs, and pass savings along to customers. But one day, his boss pulled him aside and told him that, in effect, he’d been naïve.

“We’re not here to save the world,” the boss said. “We exist to make money.”

The British economist Roger Bootle has written about the difference between “creative” and “distributive” work. Creative work, Bootle says, is work that brings something new into the world that adds to the total available to everyone (a doctor treating patients, an artist making sculptures). Distributive work, on the other hand, only carries the possibility of beating out competitors and winning a bigger share of a fixed-size market. Bootle explains that although many jobs in modern society consist of distributive work, there is something intrinsically happier about a society that skews in favor of the creative.

“There are some people who may derive active delight from the knowledge that their working life is devoted to making sure that someone else loses, but most people do not function that way,” he writes. “They like to have a sense of worth, and that sense usually comes from the belief that they are contributing to society.”
During my interviews with young bankers, I heard a lot of them express this exact sentiment. They wanted to do something, make something, add something to the world, instead of simply serving as well-paid financial intermediaries at giant investment banks. It doesn’t hurt that creative jobs—including, but not limited to, jobs with Silicon Valley tech companies—are now considered sexier and more socially acceptable than Wall Street jobs, which still carry the stigma of the financial crisis. At one point, during the Occupy Wall Street protests, Jeremy told me that he had begun camouflaging his Goldman affiliation in public.

“I lie whenever I go out now,” he told me. “I tell people I’m a consultant, a lawyer, whatever—anything but a Wall Street guy.”

I won’t spoil the end for you—you’ll have to read the book to find out how Jeremy and Samson ended up coping with their dissatisfaction—but suffice it to say that they both found creative work that satisfied their desire to make a difference while still providing financial stability and drawing upon their well-honed business skills. For them, and for countless other young Wall Streeters in the post-crash era, the promise of a six-figure paycheck alone just doesn’t cut it anymore.