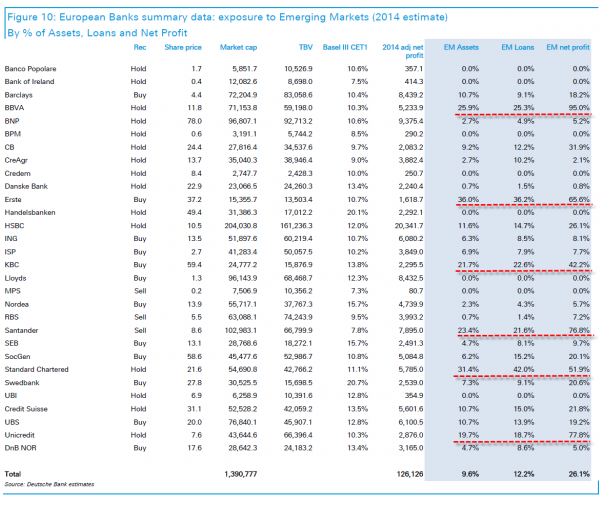 European banks have $3 trillion of exposure to emerging markets

By Steve Slater
LONDON Mon Feb 3, 2014 6:20pm GMT
(Reuters) - European banks have loaned in excess of $3 trillion (1.83 trillion pounds) to emerging markets, more than four times U.S. lenders and putting them at greater risk if financial market turmoil in countries such as Turkey, Brazil, India and South Africa intensifies.
The risk is most acute for six European banks - BBVA, Erste Bank, HSBC, Santander, Standard Chartered, and UniCredit - according to analysts.
But the exposure could be a headache for the industry as a whole, just as it faces a rigorous health-check by the European Central Bank, aiming to expose weak points and restore investor confidence in the wake of the 2008 financial crisis.
"We think EM (emerging markets) shocks are a real concern for 2014," said Matt Spick, analyst at Deutsche Bank. "When currency (volatility) combines with revenue slowdowns and rising bad debts, we see compounding threats to the exposed banks."
The Deutsche Bank analysts said the six most exposed European banks - which they did not name - had more than $1.7 trillion of exposure to developing markets.
In recent weeks, emerging market currencies have come under fire as China's growth slows and the U.S. Federal Reserve winds down its stimulus programme, with investors selling developing market assets in anticipation of higher U.S. interest rates.
In a bid to protect currencies, interest rates have been hiked in Turkey and elsewhere, but investors remain nervy, especially around the so-called "Fragile Five" economies of Turkey, Brazil, India, Indonesia and South Africa.
An emerging markets crisis could hit banks in a variety of ways - a collapse in local currency can hurt reported earnings or capital held in the country; loan losses can jump as interest rates rise; or income from capital markets activity or private banking can fall.
European banks' exposure varies from country to country. BBVA (BBVA.MC) and UniCredit (CRDI.MI) have big exposure to Turkey, Santander (SAN.MC) is most exposed to Brazil, while Standard Chartered (STAN.L) and HSBC (HSBA.L) would be hurt by problems in India and Indonesia. Barclays (BARC.L), meantime, would be most exposed to South African problems, analysts said.
However, they said the impact of apparently individual problems, such as inflation in Venezuela or lower growth in India, could quickly spread into wider concern among investors, and had already contributed to a 7 percent drop by Europe's bank index .SX7P in the last two weeks.
The biggest risk is that a jump in interest rates sparks defaults on loans, analysts added. Often a credit shock follows or replaces a currency shock, as happened in Argentina in 1999-2002.
EXPOSURE
Europe's banks have cut their overseas loans since the financial crisis and substantially increased the amount of capital they hold, meaning they have a better cushion to absorb losses than in the past.
But they still have about 12 percent of their assets in emerging markets, and about a quarter of their earnings come from the region as often the businesses there are "unusually profitable", Deutsche Bank's Spick said.
European banks had $3.4 trillion of loans to developing countries at the end of September, according to data from the Bank for International Settlements.
British banks had a $518 billion exposure to the Asia-Pacific region, Spanish banks had $475 billion of loans to Latin America, and banks in France and Italy each had $200 billion of exposure to developing economies in Europe.
Among the most exposed banks, Standard Chartered makes more than 90 percent of its earnings from Asia, Africa and the Middle East, and warned in December that its 10-year record of earnings growth would likely end.
BBVA had 41 billion euros ($55 billion) of exposure to Mexico - which last year made up 80 percent of group profits - and 52 billion euros of loans to South America.
Santander had 132 billion euros of loans to Latin America at the end of last year, half of which were in Brazil. Brazil contributed 23 percent of group earnings last year, and the rest of Latin American contributed another 24 percent.
Analysts said emerging market turmoil could also have a broader, indirect impact on revenues in investment banking and wealth management.
"A significant increase in volatility in EM bonds and FX may result in volumes drying up and hence a potential for a material slowdown in EM fixed income revenues," said JPMorgan analyst Kian Abouhossein.
He estimated the investment banks of HSBC and Standard Chartered each generated $2.1-2.2 billion from emerging markets, while Credit Suisse (CSGN.VX) and Deutsche Bank (DBKGn.DE) made about $1.1 billion each.
($1 = 0.7397 euros)
Postado por Pedro Erik Carneiro às 09:49