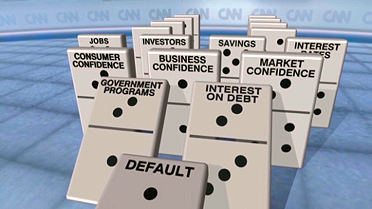 By Bloomberg News Feb 10, 2014 12:42 AM GMT-0200
The extra cost to borrow for China’s riskiest companies is at the highest in 20 months as soaring interest rates heighten concern the nation will experience its first onshore bond default.
The yield gap on five-year AA- notes over AAA debt jumped 27 basis points last month to 224, the most since June 2012, Chinabond indexes show. Ratings of AA- or below are equivalent to non-investment grades globally, according to Haitong Securities Co., the nation’s second-biggest brokerage. The similar spread in the U.S. is 403 basis points, Bank of America Merrill Lynch data show.

The failure of coal companies to meet payment deadlines for trust products has increased concern over debt defaults, with the equivalent of $53 billion of bonds sold by renewable energy, construction materials, metals and mining companies due in 2014. A report on Jan. 30 signaled China’s factories are contracting for the first time since August amid signs of financial stress including mounting losses and bailouts.

“China’s bond market will definitely see its first default this year,” said Xu Hanfei, a bond analyst in Shanghai at Guotai Junan Securities Co., the nation’s third-biggest brokerage. “The economy is slowing while the government seems still confident about growth, which means the authorities probably won’t announce any measures to avert the slowdown. This is the worst scenario.”

A further $21 billion of securities in those three sectors mature in 2015, the Bloomberg data show, with companies including Baoshan Iron & Steel Co., China Minmetals Corp. and Wuhan Iron & Steel Co. among the most indebted. Bonds of steel and coal companies are under added pressure considering the government’s campaign to reduce smog, and industry overcapacity, according to Moody’s Investors Service, which has a negative outlook on both.

LDK Solar Co. is looking at ways to restructure obligations on its offshore yuan debt after missing payments on its dollar debt last year. Zhuhai Zhongfu Enterprise Co. (000659), a manufacturer of beverage packaging, said on Jan. 28 its 2015 debentures may be suspended from trade after its estimated net loss was as much as 450 million yuan ($74.2 million) in 2013. The yield on the 5.28 percent notes has climbed 217.5 basis points this year to 18.76 percent, exchange data show.

The world’s second-biggest economy slowed in the fourth quarter to 7.7 percent from 7.8 percent in the previous three months as Premier Li Keqiang drove up money-market rates to encourage companies and local governments to deleverage.
China’s central bank signaled in a Feb. 8 report that volatility in money-market interest rates will persist and borrowing costs will rise, further underscoring the risk of defaults which could weigh on confidence and drag down growth.
China Credit Trust Co. reached an agreement last month to repay bailed-out investors in a high-yield product whose threatened failure spurred concern bad debts will rise in the nation’s $1.7 trillion trust industry.
The gap between top-rated and lower-rated bonds in China may widen further this year as news about possible defaults shakes the market, according to Cheng Qingsheng, an analyst at Evergrowing Bank Co.
“There should be a default in China’s onshore bonds this year,” Shanghai-based Cheng said. “Privately issued bonds have higher default risks than publicly traded bonds.” A first default may happen in the steel, coal, shipping or photovoltaic power industries, Cheng said.

As default concerns escalate, the cost of insuring the nation’s debt against non-payment is rising. China’s credit-default swaps have increased 13 basis points this year to 93 as of Feb. 7. The yuan fell to 6.0646 per dollar on Feb. 7, the lowest level this year. It was little changed at 6.0605 as of 10:32 a.m. in Shanghai.
There have been no defaults in China’s publicly traded domestic debt market since the central bank started regulating it in 1997, according to Moody’s.
Local governments have helped some companies avert missing payment deadlines, according to Yao Wei, the Hong Kong-based China economist at Societe Generale SA. CHTC Helon Co., a fiber maker which used to be called Shandong Helon Co., repaid 400 million yuan of notes in April 2012 even as it failed to make loan repayments.
Shanghai Chaori Solar Energy Science & Technology Co. (002506), which averted default on an interest payment last year and had just 618.7 million yuan cash as of September, will pay 898 million yuan of debt in March, according to Guotai Junan. The solar-panel maker’s debt-to-asset ratio was 90.1 percent at the end of the third quarter, according to a company financial report released Oct. 27.

Other companies are receiving help from related entities. Changzhou Wintafone Chemical Co., a maker of herbicides and insecticides based in the eastern province of Jiangsu, said last month it’s stopped production and can’t repay notes due in March. Changzhou Qinghong Chemical Co., the note’s guarantor, repaid 36.9 million yuan on its behalf on Jan. 17.
A first default may be avoided if local governments continue to step in, said Beijing-based Yang Feng, a bond analyst at Citic Securities Co., the nation’s biggest brokerage.
“The cost of a default on a bond would be very high,” said Yang. “If a company in Shanghai defaults, it would be difficult for every company in the city to raise money.”

The yield on AA- rated five-year corporate bonds climbed 13 basis points last month to 8.38 percent. The rate on the benchmark five-year government bond dropped 24 basis points to 4.22 percent over the same period.
The average yield on high-yield Dim Sum bonds, or yuan-denominated notes sold in Hong Kong, has climbed 14 basis points this month to 5.66 percent on Feb. 6, the highest since October, according to an index compiled by HSBC Holdings Plc. Yields averaged 5.52 percent on Dec. 31.
U.S. dollar-denominated 13.25 percent notes sold by Glorious Property Holdings Ltd. (845) in February last year and due in 2018 were yielding 19.61 percent on Feb. 7, Bloomberg-compiled prices show. The company’s chief executive officer and chief financial officer resigned last week, less than one month after shareholders rejected an offer by Chinese billionaire Zhang Zhirong to take the developer private.
“Investors have turned cautious on high-yield bonds,” said Guotai Junan’s Xu, who forecasts China’s economy will grow 7 percent this year. “Since China’s onshore bond market hasn’t had a default, the market may not have priced in all the risk it should have.”

Sinovel Wind Group Co. (601558), said on Jan. 29 its bonds due 2016 may be suspended from trade because it may report a second year of losses. The yield on the 6.2 percent notes has jumped 329 basis points in 2014 to 15.01 percent as of today. Similarly, Nanjing Iron & Steel Co. (600282), partly owned by Chinese billionaire Guo Guangchang, said last month its 2018 bonds may stop trading because it too could report a second year of losses. The yield on those notes has soared 208 basis points this year to 10.72 percent, exchange data show.
“It would be best if the government will allow defaults,” Zhang Ming, a senior research fellow at the government-backed Chinese Academy of Social Sciences in Beijing, said in a Jan. 22 interview. “The bubbles are gradually inflating, and sooner and later there will be a collapse. The best scenario is that you allow defaults in some places when you are ready so that some risks can be released. The later the default, the more damaging.”