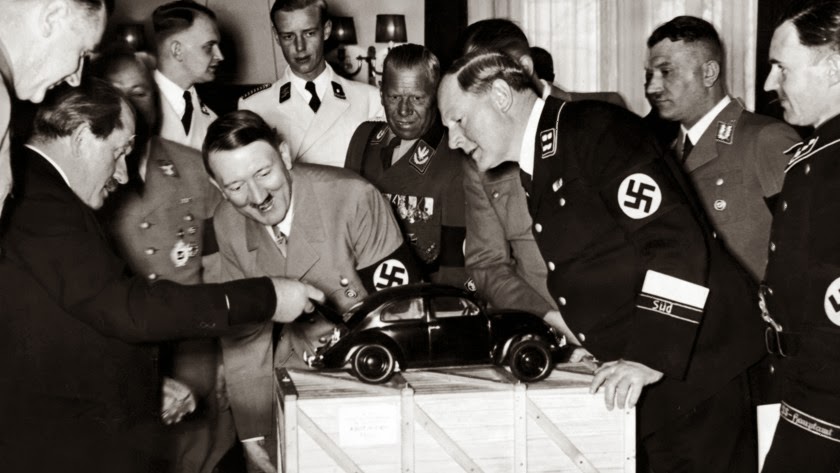 
Ferdinand Porsche, the founder of the 911 sports-car maker, created the first hybrid more than 100 years ago and designed the original Volkswagen Beetle. Those achievements haven’t counted for much in his hometown.
That legacy will once again be tested as a new exhibition prepares to open in the Czech village of Vratislavice nad Nisou, where Porsche was raised and residents resisted municipal efforts to be associated with the auto pioneer. Under communism, Porsche sports cars were unwelcome symbols of capitalist excess. Then, the engineer’s connection to the Nazis made him controversial in the region annexed by Adolf Hitler’s regime.
“It wasn’t really advertised that Porsche was born here,” said Milan Bumba, a resident of Vratislavice who developed a fascination for the brand in the 1980s and has since tried to promote the town’s connection to the auto engineer. “Decades of Porsche’s engineering career are fascinating, and he’s left a mark on history.”
Thanks largely to Bumba, who’s financed past auto pursuits in part by pilfering his wife’s savings for a new kitchen, a private 25-vehicle exhibition celebrating Porsche’s career will open there in May at an old brewery.
A publicly funded show that was losing money closed last year after townspeople insisted references to Porsche’s membership in the Nazi SS and the use of forced labor by his company be added. The Porsche brand, which had loaned vehicles to the exhibition, subsequently withdrew the cars. A Porsche family representative didn’t respond to a request for comment about the dispute in the town.

The controversy included welcome signs to Vratislavice that had references to the engineer, who was born there in 1875. Authorities in the town, which is about 110 kilometers (68 miles) northeast of Prague, had them removed in November after complaints.
“I had a problem with using municipal money to promote Porsche without any recognition of his war past,” said Pavel Hrstka, a local activist who organized a petition against the signs in 2009 and filed a complaint against the mayor at the time. “There are far more important things to spend municipal money on than this.”
The conflict over Porsche’s legacy in his hometown, which was known as Maffersdorf when he lived there and was part of the so-called Sudetenland which was annexed by Nazi Germany in 1938, reflects bigger challenges in unifying Europe. National differences remain an undercurrent in the bloc. And in Vratislavice, where wages in the region average 22,915 koruna ($1,146) a month, history trumped the lure of tourist money.

“Europe’s past is full of controversial events, and the Czechs have never had a serious discussion on how to deal with their own past and where to draw a line of what’s acceptable and what’s not,” said Jiri Pehe, director of New York University in Prague. “Erasing famous people, that at some point got involved with communism or Nazism, from history, isn’t a solution.”
Ferdinand Porsche joined the Nazi party and Hitler’s Schutzstaffel, or SS, in 1937 in connection with his contract to develop a people’s car for Germany. He was arrested by French authorities following World War II and was released without charges after 20 months. He died in 1951.
Porsche was a passionate engineer and left his hometown as an 18-year-old to pursue a career in Vienna, where he sneaked into university lectures. He developed a gasoline-electric hybrid -- theLohner-Porsche Mixte -- in 1901 and designed one of the first race cars, known as the Prince Henry, in 1906. He never received formal training.

After working for coach-builder Jakob Lohner & Co. and automaker Austro-Daimler, he founded his own engineering company in Stuttgart in 1931. That company ultimately evolved into the sports-car maker that bears his name and is now part of Volkswagen AG (VOW), the Wolfsburg, Germany-based automaker that was created by Hitler to build the original Beetle.
His engineering feats, rather than any political affiliation, is what hooked Bumba after buying a VW Karmann-Ghia in 1982, a model that was essentially a sportier variant of the Beetle. That sparked an interest in German auto engineering and ultimately led to the realization that one of its key players was born and raised just a few streets from the 53-year-old bus driver’s home.
“What he did during the war was just one segment of his life,” said Bumba, who during communism was questioned by authorities for his interest in the bourgeois brand.
Other residents of Liberec, the district where Vratislavice is located, haven’t been as impressed, objecting chiefly to the use of public funds to promote a former Nazi party member.

“If there’s going to be a private museum or something, that’s OK,” said Michal Hron, head of the Jewish community of Liberec. The town’s signs and exhibition were an “unsuitable adoration of Porsche, which wasn’t correct regarding his past.”
Liberec was once among the most industrialized areas of the Czech region, where textile, glass and jewelry manufacturing flourished. A factory in Vratislavice made the world’s largest carpet for the Waldorf Astoria in New York in the 1920s.
Its strategic value made the area a prize for the Nazis. Konrad Heinlein, the leader of the Sudetenland German Party who pushed for annexation, was born just a few houses away from Porsche’s home, which is now owned by VW’s Czech unit Skoda. After the war, most Sudeten Germans were expelled from Czechoslovakia.

An exhibition that opened in 2010 at Vratislavice’s cultural center closed last year after disgruntled locals called for more Nazi-era details. Porsche later took back the cars that were on display because of a “routine” rotation of its vintage cars, Dieter Landenberger, the manager of Porsche’s historical archives, said in an e-mailed response to questions.
Aside from local criticism, the latest project also has to overcome tough economics to survive. The earlier exhibit, which was a project of the previous mayor, generated 4,850 koruna ($243) in admission fees in 2012 and about half that amount last year. The costs to maintain the site, which is part of a newly-built cultural facility, was as much as 350,000 koruna a year, according to the new Vice Mayor Vladimir Braun.
Bumba is unfazed and plans to push on with his effort to promote the town’s place in automotive history and, in the process, draw visitors to this rugged area. He now has more supporters after publicity over the previous spat.
“After the municipal exhibition was canceled, I got calls from total strangers telling me that they will lend me their vintage cars to be shown in the Ferdinand Porsche museum,” Bumba said.