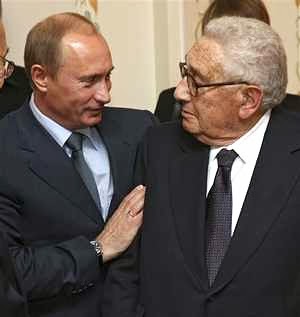 Resolving the Ukrainian crisis requires Moscow to accept that Ukraine will not again become its satellite, and for the West to accept that Ukraine is too integral to Russian civilization to be treated as just another independent country, Henry Kissinger wrote in a commentary published in The Washington Post.

Kissinger, 90, was U.S. secretary of state from 1973 to 1977 under Richard Nixon and Gerald Ford. He is associated with the realpolitik school of political science, which prefers finding solutions based on diplomacy and power not ideology.

He warned against demonizing Russian President Vladimir Putin. Doing so is no basis for policy but is "an alibi for the absence of one," he wrote.

On Ukraine, Kissinger cautioned against confrontation between Russia and the West.

"In my life, I have seen four wars begun with great enthusiasm and public support, all of which we did not know how to end and from three of which we withdrew unilaterally."

Do not force an "either-or" choice on the parties, Kissinger argued. "If Ukraine is to survive and thrive, it must not be either side's outpost against the other – it should function as a bridge between them."

"Ukraine can never be just a foreign country" to Russia, the former secretary of state wrote. It is where "Russian history began." It's "polyglot composition" means that "any attempt by one wing of Ukraine to dominate the other" would result in "civil war or breakup."

Ukraine has known only 23 years of independence and hundreds of years of foreign rule, he wrote. One part of the country is Russian-speaking and Orthodox Christian; the other is Catholic and Ukrainian-speaking.