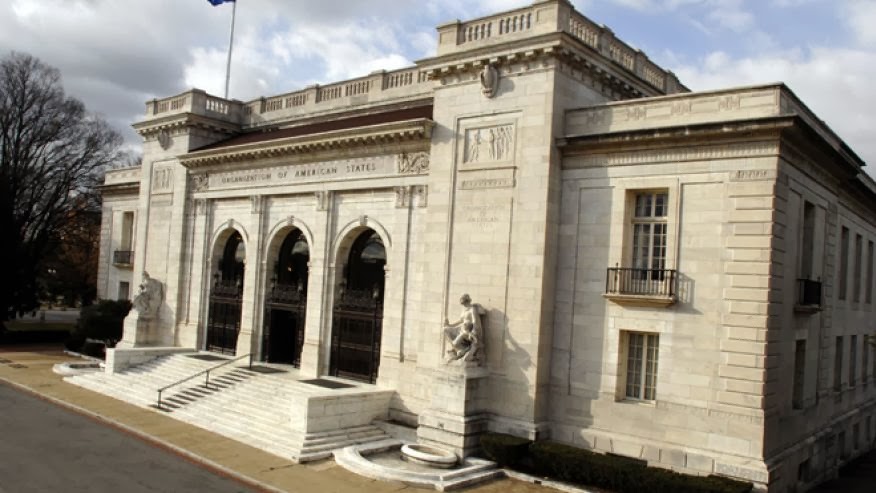 By Judson Berger
Published March 11, 2014
In the shadow of the Washington Monument sits the headquarters of an organization, the oldest of its kind in the world, founded on the pillars of human rights and democracy promotion.

But the Organization of American States -- which dates back to 1948 and now includes all 35 nations of the Western Hemisphere -- increasingly has become a thorn in the side of U.S. policy and a flashpoint for hawkish members of Congress who assail its allegedly "feckless" leadership.

A recent dispute over Venezuela's political unrest once again has renewed that fight. On Friday, the OAS effectively punted, issuing what critics called a watered-down resolution which made clear the group would stay out of Venezuela's affairs.

The Obama administration, and U.S. lawmakers, are now assailing the OAS for failing to take a stand. Sen. Marco Rubio, R-Fla., called the resolution a "sham."

Rep. Ileana Ros-Lehtinen, R-Fla., called it "unconscionable that the Member States at the OAS find it difficult to stand up for the people of Venezuela."

Ros-Lehtinen has been one of the organization's toughest critics over the years, and a spokesman told FoxNews.com she remains "open" to trying, as she has in the past, to defund the organization.

The U.S., which took a lead role in forming the OAS more than 60 years ago, is still the biggest donor, covering more than 40 percent of its annual budget. The U.S. contributed more than $65 million in fiscal 2013. Congress passed, and President Obama signed, a bill last year that aims to reduce U.S. spending and encourage other OAS reforms.

Ros-Lehtinen, in a statement to FoxNews.com, suggested further reforms are needed.

"We can no longer stand idly by and let the OAS self-destruct into irrelevance due to its feckless Secretary General and some Member states that fail to support democratic principles," she said. While praising divisions of the OAS like its human rights commission, she accused the group of turning its back "against those seeking freedom."

The OAS is somewhat of a regional Rorschach test. Some leftist South and Central American leaders see it as a longstanding tool of Washington. Many U.S. lawmakers see an organization that, despite its anti-communist roots, has taken a sharp turn away from the United States in recent years.

The fizzle over Venezuela fueled those concerns.

The group's resolution on Friday, while rejecting violence in Venezuela, backed the "principle of nonintervention in the domestic affairs of states" and voiced support for government-led peace talks. The United States, Canada and Panama objected but were overruled by the 29 states, including Peru and Chile and other South American countries, voting in favor.

The Obama administration complained that the supposed peace talks are supported only by the government and blasted the OAS for sticking to a platform of nonintervention.

"The OAS cannot sanction a dialogue in which much of the opposition has no voice and no faith," the U.S. said in a footnote to the resolution. "Only Venezuelans can find the solutions to Venezuela's problems, but the situation in Venezuela today makes it imperative that a trusted third party facilitate the conversation as Venezuelans search for those solutions."

Vice President Biden, in Chile for the swearing-in of that country's president, held a series of one-on-one meetings early this week with South American leaders, and Venezuela was expected to be a prime topic. He capped the set of meetings Tuesday morning with a sit-down with Colombian President Juan Manuel Santos.

As the administration faces accusations from Republican lawmakers of ignoring a troubling trend with Latin American leaders, though, Biden had harsh words for Venezuelan President Nicolas Maduro. He suggested to a Chilean newspaper that the government was using "armed vigilantes" against protesters and accused it of fabricating "outlandish conspiracy theories" about the U.S.

According to The Associated Press, Maduro fired back, saying: "They were defeated in the OAS and now they want revenge."

It's not the first time the U.S. has struggled to advance its policies at the OAS. Not only did the group technically lift a decades-long suspension on Cuba in 2009, but it often has been reluctant to criticize its own members -- leaning on a policy of nonintervention. When the late Venezuelan President Hugo Chavez gave himself broad executive powers in late 2010, unilaterally approving dozens of changes over an 18-month period, the OAS did not interfere. The OAS also took no action in 2004 when Ecuador's president at the time dissolved the Supreme Court of Justice.

Still, other elements of the OAS have taken a tough stance against the misbehavior of its members, including a 2010 report that slammed Chavez' policies in Venezuela.

But criticism of Venezuela may only go so far. One concern in the region is that Venezuela's Latin American neighbors will avoid criticizing the government because they benefit from the country's subsidized oil. The leadership of other regional groups is already aligned with the Maduro government.

Panama stuck its neck out by calling for the OAS to get involved in the first place, only to see Venezuela break off relations with the Central American country.

Rubio also faulted the Obama administration, claiming it has "neglected the region to the point of making the U.S. mere bystanders, as authoritarians destroy decades of hard fought democratic gains" and saying this should be a "wake up call" for the need to "redouble our efforts" in Venezuela.

Secretary of State John Kerry said late last month that the U.S. is working with Colombia, and other countries, to "see how some kind of mediation might be able to take place."

He said the U.S. is open to a "constructive relationship" with the country but "Venezuela has spontaneously decided again and again to move in a different direction, and more often than not, to try to blame the United States for its own lack of governance and inattention to its economy."

The demonstrations reflect frustrations, largely among the Venezuela middle class, over out-of-control inflation, violence and shortages of basic items.