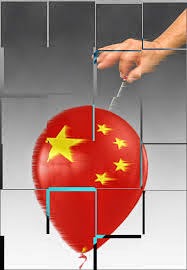 
Towers where no lights burn at heart of China’s puzzle

By Jamil Anderlini in Yuncheng

In a steel and coal-mining region of 5m people in the Chinese heartland, signs of economic slowdown are everywhere.
Forests of newly built but nearly abandoned apartment complexes with names such as Fortune Plaza and Golden Riverside ring central Yuncheng while, on the outskirts of town, the district’s largest steel mill has gone bust, leaving mountains of unpaid debt and nearly 10,000 idle workers.
“I used to bring lots of investors and steel people out here to visit the plant,” says Zhang Pu, a taxi driver waiting outside an empty hotel next to the headquarters of Highsee Group, the troubled steelmaker. “These days the only people who want to come here are local peasant farmers or debt collectors.”
China’s economy expanded 7.4 per cent in the first quarter of the year from the same period a year earlier, a sharp slowdown from 7.7 per cent growth in the fourth quarter of 2013.
That is still an enviable rate by the standard of most countries but in Yuncheng and other cities across China, the headline figure masks a multitude of growing problems.
The main reason for the slowdown is a slump in fixed asset investment, the biggest driver of the Chinese economy.
In the first three months of the year, investment grew 17.6 per cent from the same period a year earlier, the slowest pace since late 2002.
The slide was largely owing to declining real estate investment, which also experienced its weakest growth in more than a decade. The situation is certain to get worse in the coming months as new housing floor space under construction contracted 27.2 per cent in the first quarter.
That was largely a reaction to declining sales, which fell 5.7 per cent in terms of floor space in the first quarter from a year earlier, with the fall especially pronounced in smaller inland cities such as Yuncheng.
“Our surveys show clear divergence in price trends with first-tier major cities experiencing mildly rising housing prices,” Sheng Laiyun, spokesman for China’s National Bureau of Statistics, said on Wednesday at a press conference to announce first-quarter GDP. “In some second-tier cities prices are shaky and in third and fourth-tier cities, especially those with ample supply, prices have come down.”
The fate of China’s overheated real estate market is absolutely critical to the health of the overall economy.
Real estate construction directly accounted for 16 per cent of GDP in 2013, according to estimates from Nomura.
At that level China is approaching a dependence on property last seen in Ireland and Spain before the bursting of their bubbles.
In the past, and particularly after the 2008 global financial crisis, Beijing has turned to credit-fuelled property construction as the quickest and easiest way to boost flagging growth.
...
But with so many freshly built apartment towers already standing empty across the country, another round of manic, state-sanctioned real estate construction would amount to “yin zhen zhi ke” – “drinking poison to quench one’s thirst”.
“It is the lack of final demand, existence of excess capacities and barriers to private investment that have curbed China’s corporate investment and overall growth,” said Wang Tao, an economist at UBS. “Against this background, stronger credit growth will not lead to sustained stronger corporate investment growth, but would likely lead to a continued build-up of unsustainable leverage levels in China’s problematic local government debt and property sectors.”