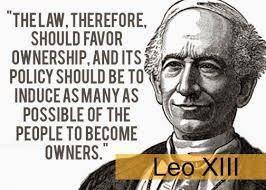 Americans and popes alike can embrace a humane alternative to modern capitalism.


Late last year, when Pope Francis issued his first apostolic exhortation, “Evangelii Gaudium,” much more was made of his utterances on economics and what he branded a globalization of indifference than his vision of evangelism for the Catholic faithful. Sarah Palin, a conservative evangelical, told CNN that the Pope surprised her, that his statements sounded “kind of liberal.” Rush Limbaugh said he was “befuddled” at the Pontiff’s remarks and then added, “This is pure Marxism coming out of the mouth of the Pope.” R.R. Reno pointed out in First Things that these knee-jerk reactions from the right were as inaccurate as the knee-jerk reaction from the left: The Pope is one of us—thank God!
In the midst of their scramble to claim the new Pope, many on the left missed what the Pontiff said was a nonsolution. The problems of the poor, he said, could not be solved by a “simple welfare mentality.” Well, by what then? The document is clear: “a better distribution of income.” And how might this be achieved? Through the “right of states, charged with vigilance for the common good,” to exercise some control against an “absolute autonomy of the marketplace and financial speculation.”
The Pope called for a kinder and gentler capitalism. Admittedly, he did not provide many policy details other than, “We can no longer trust the unseen forces and the invisible hand of the market … it requires decisions, programmes, mechanisms and processes specifically geared to a better distribution of income.” It is that phrase, “distribution of income,” that struck fear into Palin and Limbaugh, and perhaps even Reno. It smacks of socialism—what Reno called the only and obviousalternative to capitalism. Reno briskly passed over any notion of a third solution, one many sons and daughters of Rome have rallied to for over a century.
The word distributism does not appear in the treatise, and nowhere does Francis fall back on his predecessors or Catholic intellectuals who have supported a third way of economic ordering. Nevertheless, policies that allow for the flourishing of smaller economic units while at the same time valuing work and broader property ownership are consistent with Catholic social teaching.
Francis, after all, is only one of several modern Popes to have criticized capitalism. At the apex of the Industrial Revolution Pope Leo XIII addressed the disparity between the rich and the poor in his 1891 encyclical Rerum Novarum, setting forth the proper duties between worker and employer. Workers were to faithfully perform their duties and refrain from acts of violence and destruction of property. Employers were to pay a living wage, provide time off for religious days and holidays, and respect workers according to ability, age, and gender. In addition to promoting the dignity of the worker, the encyclical asserted that owning property was a basic human right according to natural law. The employer has a right to property, but the laborer should be able to advance so that he too could own property.
To mark the 40-year anniversary of Rerum Novarum, Pope Pius XI reasserted the foundational necessity of private property ownership for a free society.Quadragesimo Anno (1931) re-emphasized the importance of fair wages and ethical relations between worker and employer. Pius XI placed special emphasis on the functionality of small- and medium-sized enterprises to maintain a balance in the social order against the threat of monopolizing powers. Both Pope Pius XII and John Paul II spoke expressively of solidarity, the idea that we need associations to survive and thrive economically.
These Popes are only the beginning of thoughtful Catholic critiques of capitalism’s ill effects. British writer and historian Hilaire Belloc said that if pure capitalism reigned there would be constant unemployment, starvation in the streets, and perpetual turmoil. Belloc believed modern capitalism was an unstable force and in conflict with the moral theories of liberty. Belloc’s contemporary, G.K. Chesterton, couldn’t have agreed more, and they both directed much of their energies into disparaging what they deemed to be the “Servile State,” an economic system whereby an unfree majority of nonowners work for the pleasure of a free minority of owners.
Belloc and Chesterton were supporters of distributism. Distributism is not a form ofsocialism or communism. Rather, it envisions an economy with the widest use of private productive property. Distributism is best viewed as a humane microcapitalism. While the American version of it is found in Jefferson’s agrarian society, the Russian version of it is found in Alexander Solzhenitsyn’s “democracy of small places.” Belloc and Chesterton were not opposed to capitalism per se, but they saw unrestrained capitalism to tend toward state-sustained monopolies. When Chesterton quipped, “Too much capitalism does not mean too many capitalists, but too few capitalists,” he had in mind a robust economy of small businesses and family farms.
The pastoral ideal of village and farm runs through the writings of many prominent Catholic literary figures. What does one think J.R.R. Tolkien was up to when he gave us those ecoguardians of the forest, the Ents, in his Lord of the Rings trilogy? The smokestack, assembly line, and A-Bomb nauseated Tolkien. What was the Ring itself but greed and power and audacity all rolled up into one formidable symbol? The only industrial power in Middle Earth is Mordor, that vast wasteland, where “nothing lived, not even the leprous growths that feed on rottenness.” When Frodo and Sam return from their quest they are taken back at the changes brought to the Shire, their home. Thugs were now in charge, hobbits were displaced, gardens were ransacked, and the new buildings were ugly. “This is worse than Mordor!” says Sam. “Much worse in a way. It comes home to you, as they say; because it is home, and you remember it before it was all ruined.”