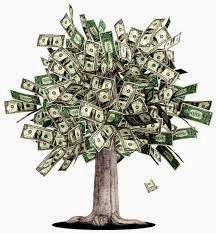 Speaking at The Brooking Institution on April 12, Reserve Bank Of India Governor Raghuram Rajan  - no stranger to controversial truthiness (as we have noted here and here) - made clear his views on the rest of the world's central bankers as he concluded, "the first step to prescribing the right medicine is to recognize the cause of the illness. And,when it comes to what is ailing the global economy, extreme monetary easing has been more cause than cure. The sooner we recognize that, the stronger and more sustainable the global economic recovery will be."

More problematic, the disregard for spillovers could put the global economy on a dangerous path of unconventional monetary tit for tat. To ensure stable and sustainable economic growth, world leaders must re-examine the international rules of the monetary game, with advanced and emerging economies alike adopting more mutually beneficial monetary policies.

To be sure, there is a role for unconventional policies like quantitative easing (QE); when markets are broken or grossly dysfunctional, central bankers need to think innovatively. Indeed, much of what was done immediately after the collapse of US investment bank Lehman Brothers in 2008 was exactly right, though central bankers had no guidebook.

But problems arise when these policies are extended beyond repairing markets; the domestic benefits are at best unclear when economies are deeply damaged or need serious reform, while the spillovers from such policies fuel currency and asset-price volatility in both the home economy and emerging countries.

...
Central banks, in an effort to keep capital away and hold down the exchange rate, risk becoming locked into a cycle of competitive easing aimed at maximising their countries’ share of scarce existing world demand.

With a few rare but laudable exceptions, officials at multilateral institutions have not questioned these unconventional monetary policies, and have largely been enthusiastic about them. This approach carries two fundamental risks.

The first hazard is a breakdown of the rules of the game. Endorsing unconventional monetary policies unquestioningly is tantamount to saying that it is acceptable to distort asset prices if there are other domestic constraints on growth.

By the same token, it would become legitimate for countries to practice what they might call “quantitative external easing” (QEE), with central banks intervening to hold down their exchange rates, while building huge reserves.

If net spillovers do not determine internationally acceptable policy, multilateral institutions cannot claim that QEE contravenes the rules of the game, regardless of how much instability it engenders.

...
The second danger is that source countries’ unwillingness to take spillovers into account causes unintended collateral damage in recipient countries, prompting self-interested action on their part.

Even as source-country central banks have painstakingly communicated how domestic conditions will guide their exit path from unconventional policies, they have remained silent about how they would respond to foreign turmoil.
The obvious conclusion – reinforced by the recent financial-market turbulence that followed America’s move to exit from more than five years of QE – is that recipient countries are on their own.

As a result, emerging economies are increasingly wary of running large deficits, and are placing a higher priority on maintaining a competitive exchange rate and accumulating large reserves to serve as insurance against shocks.
At a time when aggregate demand is sorely lacking, is this the response that source countries want to provoke?
Despite the evident benefits of expanding central banks’ mandates to incorporate spillovers, such a change would be difficult to implement at a time when domestic economic worries are politically paramount.

In a world with weak aggregate demand, countries are engaging in a futile competition for a greater share of it.
In the process, they are creating financial-sector and cross-border risks that will become increasingly apparent as countries exit their unconventional policies.

The first step to prescribing the right medicine is to recognise the cause of the illness. And, when it comes to what is ailing the global economy, extreme monetary easing has been more cause than cure.
The sooner we recognise that, the stronger and more sustainable the global economic recovery will be. - Project Syndicate